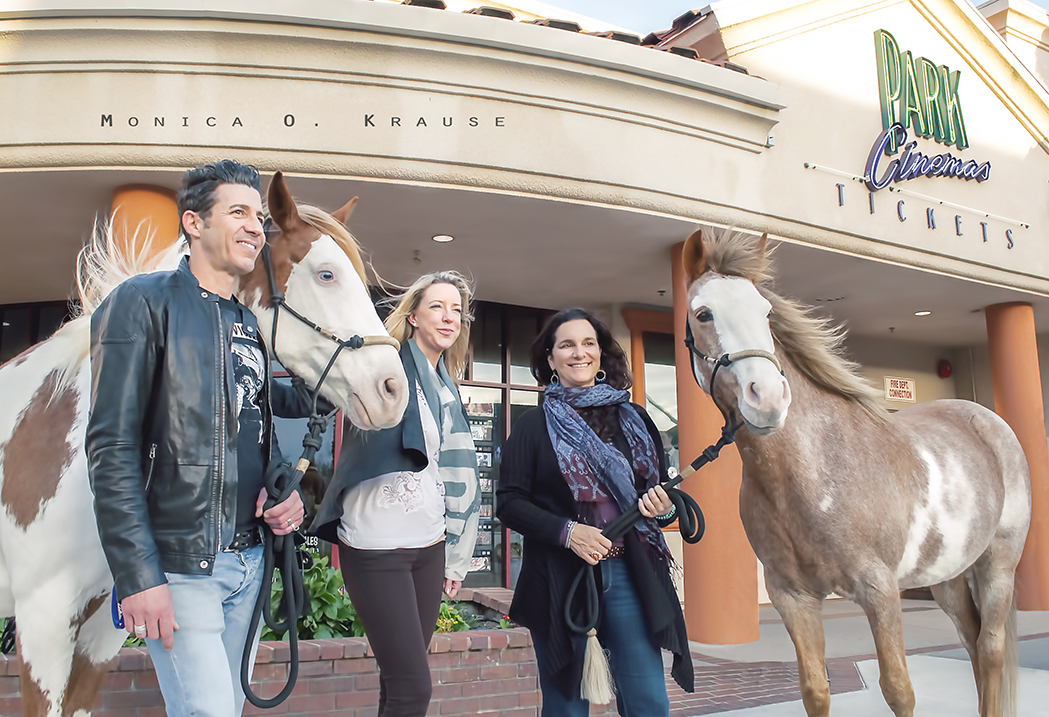 Last night, I was delighted to attend a special viewing of American Mustang 3D in Paso Robles, CA. What made it extra special? Well, the Executive Producer Ellie Phipps Price and Director Monty Miranda were present along with Neda DeMayo. DeMayo is the founder of Return to Freedom, American Wild Horse Sanctuary. She also brought along two of her Mustangs that were featured in the film. I was even lucky enough to have a bite to eat with them before the show! Upon meeting the film makers, I learned that Producer Ellie Phipps Price is head of a non-profit organization, Montgomery Creek Ranch, which is a private wild horse sanctuary. The ranch has saved 160 +/- forest service wild horses from being wiped out. Ellie also informed of a new (not yet established) trainer incentive program for some of her Mustangs. This training will help get the horses adopted, and continue to assist more horses that can be potentially saved by her sanctuary.

The film was beautifully executed and definately a story well told. It was a hybrid between being a documentary and a fictional story. This decision was made because the Director, Monty Miranda, wanted to show the beauty of the horse and not simply some scientist talking about the horses. The choice to film in 3D was also to give viewers an up close and personal view of the Mustang. Many of us can appreciate this, as we may never get the chance to be that close to one. If you love horses, please find a way to get out and watch this film! The scenes are just stunning!

In this film, you will get a front row seat on the negative impact the United States Bureau of Land Management (BLM) has on the wild horse herds. Thus bringing ultimate awareness to their continuing excessive and inhumane round-ups. These captivating scenes of horses in the wild also portray the strong and intimate bonds within the herds, bringing to light, their indispensable place in the tapestry of the North American landscape.

Upon watching the film, my emotions were pulled in many different directions. Being an advocate for the American Mustang myself, you can imagine that I would have heightened responses. Even if you knew nothing of the Mustang situation before watching the film, you will definitely know what is up by the end of it. After walking out of the theatre, I overheard some one say, “I had no idea any of this was going on! Powerful…” and proceeded to thank the director.

The film opens up to a few points of view on the subject of the American mustang. One viewpoint was that of a horse trainer who has some experience with mustangs. Another is from a girl who is in love with horses, and a cattle rancher. The latter was the most interesting to me, because cattle ranchers care about having open land and love horses, however, their complaints about wild horses competing with grazing land with their livestock has given launch and justification to further inhumane wild horse round-ups. How can that be?

Following the story of a girl, who adopted a wild mustang and having him trained by a cowboy was a great approach. It resulted in the final scene’s emotional touch (…which I won’t spoil). This heartfelt touch was accomplished with the story telling aspect. No documentary alone would be able create such a profound feeling that you share right along with the girl. Reflecting as a mustang owner, I felt sorrow for Juno because she has lost her freedom. She has no choice but to stand waiting for me in a corral. Her sense of freedom has reduced to the moments I take her out leading her to graze in the pasture while maintaing grip of the rope attached to her.

There was only one issue I ultimately had with the film, which was of the horse trainer (cowboy). The film documents the cowboy actually “gentling” a wild Mustang, which they had adopted for the movie. However, I was squirming in my seat as they used ropes on the horse and desensitizing it with a bag on a stick, as they referred to it as “gentling”. In my opinion and understanding, gentling has nothing to do with restraint or control. When you start adding those, I would call it breaking a horse. Yes there is a difference between “breaking” and “training” a horse. Breaking is just that, breaking his spirit. Training is just that, working with your horse to establish communication and trust. So, what I witnessed the cowboy do was break a horse. Gentling would be feeding him, getting him to take a carrot from your hands, touching him because he feels comfortable by your presence. None of which you need a stick, bag or rope (not very gentle!). Once you gentle your horse, you can then train your horse. This concept is what is taught at my Mustang Equestrian School.

As a result, I say “Bravo!” This film managed to evoke powerful emotions about the Mustang situation and educate me on current facts and figures. Watch this film, and you will most definitely be moved. That is my promise and I hope this film reaches many. Especially the many who may have never heard of the ridiculous holocaust that is occurring on our public lands.